During the voyage I will be drawing like a madman between bouts of seasickness, and will be putting some of the work I make and interviews with people on the boat, up on a specially built website. Some schools in Victoria (Australia) will be following my journey, sending me questions and making artwork of their own back in the classroom.

The link to the site is : http://www.nicholashutcheson.com/antarctic/

Each week, new content will be uploaded, with the first actual week onboard ship, to be put online around about the 8th of Feb. Currently there are things about before the voyage (new drawings are going up all this week as I make them).

The site should be pretty easy to get about, but for the less savvy, below I have written out a quick guide to the site, where things are etc.

I will be sending out an email alert when a new week’s worth of content has been uploaded. It will only be for the duration of the trip (8 weeks). If you would like to receive the alert, then send an email to info@nicholashutcheson.com

Last year I asked the Drawing research network members for some thoughts on the project. I am very grateful for all the ideas that I received, it gave me a good base from which to start from.

Nicholas Hutcheson
Posted by Bristol Drawing School at 16:59 No comments:

Went to the London Art fair in London last weekend and among many things that were inspiring or desiring was this Sleeper by William Kentridge, embarrassingly I had not come across his work before. this is what the Tate website had to say about the etching and the artist

William Kentridge born 1955 Sleeper is an etching produced by the intaglio process in an edition of fifty. It was made at 107 Workshop, near Bath, and published by David Krut, London, during a visit Kentridge made to England. The recumbent naked male figure depicted is very similar to one which appears in a slightly earlier etching, titled Act IV scene 7, from Kentridge's portfolio of eight etchings called Ubu Tells the Truth 1996-7. It is also thematically related to drawings made for his film Ubu Tells the Truth in 1997 (Tate T07481), which was produced in 1997. Kentridge mainly makes short animated films created typically from several large drawings, on which he draws and erases the developments of his narrative. Frequently the films are shown accompanied by the drawings which have gone into their making, providing frozen moments in the history of the film. In his film Ubu Tells the Truth he mixed other media, such as footage from documentaries, photographic stills and moving puppets, with his drawings for the first time. Sleeper, likefurther series of etchings Kentridge went on to make in the late 1990s, crystallizes some of the major issues of his work.

One of Kentridge's fundamental themes is the desire to forget, or to remain oblivious to, difficult and unpleasant aspects of reality and history. More specifically, his films depict the struggle of the white South African psyche with its conscience over the exploitation and abuse of the African land and people, during the period in which the system of apartheid was first challenged and then dismantled. Characters in his films are locked into a state of denial in which preoccupation with personal relationships (such as love affairs) provides a means to ignore the increasingly loud and insistent calls for political change. Sleeping, in Kentridge's work, is a metaphor for a state of blissful ignorance, a return to the internal world of the imagination, which conveniently allows the external world to be forgotten. However, the sleeper must always wake up, at some point, andthis moment of awakening and recognition is continually approached in Kentridge's films. It is usually an experience of painful but fertile self-knowlege, in which various types of loss bring the films' Western protagonists to an increased connection to their African landscape and heritage and to their own humanity.

Posted by Bristol Drawing School at 16:46 No comments:

Space to Draw is a curated exhibition of works from a mixture of emerging and established artists with a previous relationship with Jerwood: Antony Gormley, Neville Gabie, Peter Randall-Page, Michael Shaw, Heather Deedman, Alison Gill and Paul McDevitt. Most of these artists are known for their sculpture or site-specific work and drawing is an essential part of their practice.

http://www.jerwoodspace.co.uk/
Posted by Bristol Drawing School at 16:24 No comments:

We have been busy arranging our first exhibition to take place at the drawing school over the Easter holidays. It is a group showing a diverse range of drawing and we hope it will be inspirational to our students and the general public alike.

The exhibition is entitled Drawing Matters and takes place from the 28th March - 20th April 2008. We are very pleased to announce the following artists will be showing:

Keep checking our website http://www.drawingschool.org.uk/ for further information.
Posted by Bristol Drawing School at 16:14 No comments:

Email ThisBlogThis!Share to TwitterShare to FacebookShare to Pinterest
Categories: Our Exhibitions

BANKSY FOR A FIVER!!!

We were lucky enough to be involved in the Graffle event, http://www.graffle.co.uk/, this weekend, a charity raffle of graffiti artwork from the likes of Banksy, Nick Walker and David Shrigley.

By all accounts it was a huge success with all money going to the Bristol childrens hospital and Fairbridge West, and another event is rumoured for the summer.

For more information on the charities and to make donations go here:

www.aboveandbeyond.org.uk
www.fairbridge.org.uk
Posted by Bristol Drawing School at 07:52 No comments:

The RWA are holding an exciting drawing exhibition from the end of this month, extract from their press release below:

To kick-start 2008, Bristol will be lucky enough to be host to two of the most magnificent exhibitions of contemporary drawing in the country. The Royal West of England Academy in Clifton will be showing the acclaimed Jerwood Drawing Prize alongside Drawing Breath, a collection of drawings by the award winners and eminent selectors of this annual drawing prize. Comprising of over 180 works these exhibitions present the breadth and depth of contemporary drawing from a wide range of internationally and nationally renowned artists currently working in the UK.

Posted by Bristol Drawing School at 20:28 No comments:

nice way to start the week 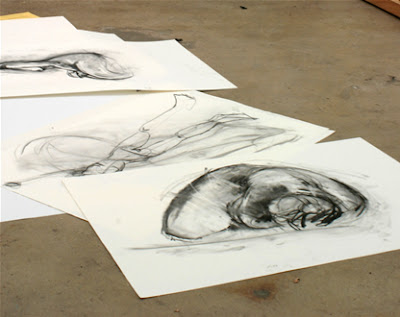 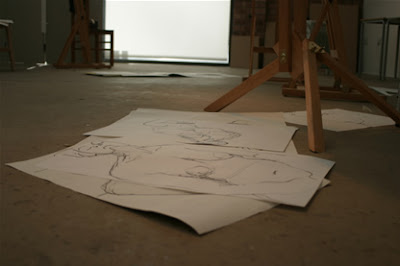 Posted by Bristol Drawing School at 18:40 No comments: 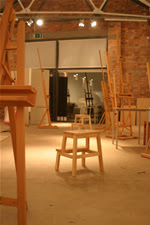 This past week saw us open our doors to the first students.

The first class was Valerie's on the monday morning and after spending a long weekend adding the final touches to the school, easels, blinds etc... it was a relief to finally see people turn up and enjoy themselves.

Due the success of the Tuesday evening class, we are thinking of adding another tutored evening class on Mondays, if you would be interested in this class let us know


Comments from the first week:

I think the class is great, and I was quite disappointed when we stopped at 12.30.
NC - Tues AM

Just back from attending this evenings drop in drawing class. Could I just tell you how much I enjoyed the event and what a super setup - I hope you go from strength to strength and I look forward to those Saturday all day events! Very well done - 10/10
KK - Wed Eve
Posted by Bristol Drawing School at 15:25 No comments:

Email ThisBlogThis!Share to TwitterShare to FacebookShare to Pinterest
Categories: life drawing, The School

Mr Gentle and the rest of the team, Ben, Andy and Cleo

An anxious wait for electricity

Posted by Bristol Drawing School at 19:58 No comments: